Pilot, who allegedly wanted to kill wife after an argument, dies after crashing plane

Aggiunto 3 anni fa
A pilot has allegedly died by suicide, leaving a trail of mayhem at the Matsieng Flying Club facility at Matsieng Aerodrome in Botswana. It is believed that the pilot had no permission to fly the aircraft involved. (www.news24.com) Altro... 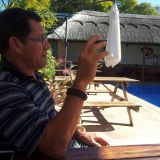 Lucien Oosthuizen 3 anni fa 5
The Matsieng Flying Club regrets to make the following announcement:
1. At approximately 18h20 GMT on 23 March 2019 a 2016 Beechcraft Kingair B200 aircraft A2-MBM was involved in an ground impact incident resulting in the death of the pilot and the destruction of infrastructure at Matsieng Aerodrome in Botswana.
2. Earlier in the afternoon the deceased pilot was an uninvited guest at a private function that was held at the Matsieng Flying Club facility at Matsieng Aerodrome. It is rumoured that the pilot was involved in a domestic dispute earlier in the afternoon.
3. At approximately 18h15 the aircraft approached Matsieng Aerodrome from the direction of Sir Seretse Khama Airport and made a number of low level fly pasts from different directions past the Club facilities next to the Air Traffic Control tower.
4. Matsieng Flying Club members sensed that the pilot might have had an ulterior motive at the time and ordered an immediate evacuation of the club premises by the approximately fifty attendees.
5. The final extreme low level run by the aircraft along runway 36 resulted in an impact with the Matsieng Flying Club facility at ground level.
6. The Club facility and Matsieng ATC tower was destroyed on impact. The post impact fire destroyed 13 parked vehicles.
7. There was no serious injury to any person in the vicinity of the accident scene.
8. The emergency services of the Kgatleng District Council were on the scene within minutes to attend to the post impact fire and distress. These response actions are to be commended.
9. It is believed that the pilot had no permission to fly the aircraft involved.
10. The loss of life and damage is regretted.
11. The relevant authorities are currently completing investigations.
Rispondi ↓•Permalink•Report

Viv Pike 3 anni fa 3
Isn't the Air Show coming up in May? Would they be able to build a new ATC Tower by then?
Rispondi ↓•Permalink•Report

Colin Smith 3 anni fa 1
Doesn’t say whether he kills his wife before this, or whether she died with him in the crash. This is taking life just too seriously. RIP.
Rispondi ↓•Permalink•Report

Colin Seftel 3 anni fa 1
This is similar to the 1999 crash in Gaberone.
https://en.wikipedia.org/wiki/1999_Air_Botswana_ATR_42_crash
Rispondi ↓•Permalink•Report