Hydrogen-powered ATR 72 gets a launch customer

geroldn 9 mesi fa 11
Commercial hydrogen is produced by stripping the hydrogen atoms out of fossil fuel - natural gas (methane, CH4) and venting the carbon as CO2 to the atmosphere. If you sequester the CO2 underground or elsewhere it is sometimes called 'blue' technology. Its only 'green' if you use electrical hydrolysis to split water molecules into hydrogen and oxygen AND your electricity comes from a renewable source.
Rispondi ↓•Permalink•Report

w2bsa 9 mesi fa 0
While what you say is true, aviation is one of the biggest contributors to CO2 pollution and that CO2 stays in the upper atmosphere much longer than what’s produced at ground level. So, anything that can get rid of the aviation component of CO2 pollution is a good thing.
Rispondi ↓•Permalink•Superiore•Report 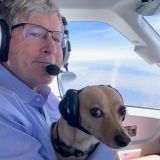 David Beattie 9 mesi fa 4
One of the biggest? According to Government stats we consume less than 3% of carbon based fuels. I understand we leave it at higher altitudes but still seems that would make us the pariah of carbon users.
Rispondi ↓•Permalink•Superiore•Report

Torsten Hoff 9 mesi fa 6
This is actually huge news -- it would be the first commercial use of hydrogen propulsion in commercial aviation. If it works and is commercially viable, it is going to lead to groundbreaking changes in aircraft design.
Rispondi ↓•Permalink•Report

Eric Scharping 9 mesi fa 4
I work in the Automotive sector. The Hydrogen application is finally more than fanfare and flag-ship leasing in specific regions and select politicians, celebrities and influencers. I was a hydrogen booster but, the more I see the less I believe that it is the best approach for passenger vehicles. I feel that long haul trucking, container ships or shipping of all types is the perfect application for hydrogen. Aviation wasn't on my radar. But, it does make sense to me and I am enthusiastic about it's application in that sector. Thanks for bringing this news to us.
Rispondi ↓•Permalink•Report

2MileFinal 9 mesi fa 3
Sounds like more work in for less work out all on the premise of a religion known as "global warming/climate change" when in my opinion it's more about the geologic time period we are in now. And I have loads of bookmarks of headlines about how data is manipulated by NOAA, NASA, etc. It's like the aforementioned engine as it applies to work in/work out energy: garbage in science garbage out science. Meanwhile, the Antarctic is LOADED with ice and has been a huge problem yet the Arctic is melting. There's climate change, but I don't think it's what everyone thinks it is and here we're all running around like the sky is falling. I'm, sure we'll find this out in due time when the Earth starts cooling again.

The ideal candidate here for an alternative fuel would be at this time natural gas. NASA had or has an aircraft that ran on NG so the technology works, just needs to be refined and engineered. NG is plentiful in the U.S. and is ripe for export to our good friends in Ireland. It's also cheaper, not only from a refining processes, but there's no creating it where that's required for hydrogen. And it's half as pollutant as your normal fossil fuels!

Now if Iceland went this route it be a lot different since they have loads of geothermal for hydrogen production. Not so in Ireland that I know of.

The current real way of creating green hydrogen is via high temperature electrolysis (HTE) from new generation nuclear power plants. But the psyche of the world as demonstrated by the "sky is falling" mentality of climate "change/global warming" shows us governments and those that wish to control and profit as well as sell "carbon offsets" think nuclear bad, less work out more work in asinine technologies are better.

In conclusion, I just hope fusion comes online for aviation's use of HTE as well as for automobiles, boats, trains and what have you up to electrical production. But it can't be controlled now can it? It would probably put less money in the stock holders hands and what not.

David Beattie 9 mesi fa 1
I wanted to post a picture of the Hindenburg but this site doesn’t allow it. ð
Rispondi ↓•Permalink•Report